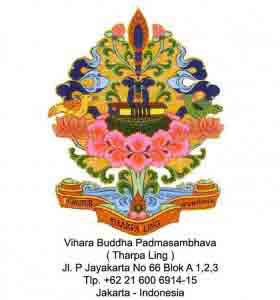 January / February  :  Dharmapala Puja , three days Dharmapala Puja  ( on the 28th, 29th and 30th of 12th month on Lunar calendar ) before  the Lunar New Year, to eliminate all disturbances that occured in the previous year.

January / February  :  Jambhala Ceremony, ceremony to invite all Jambhala for give blessing of  good fortune, health, and longevity in the following year,  on the 1st of 1st month on Lunar Calendar.

May   :   The Vesak , celebrate the Vesak sacred day in Borobudur Temple.

May / June  :  Celebrating The Vesak Month in TharpaLing monastery, on the 4th month of Lunar Calendar.

July / August / September : Ulambana, a special ceremony for all creatures that have died, on the 7th month of Lunar Calendar.