The Vesak of  Shakyamuni Buddha

The past time Buddha is  Kassapa Buddha 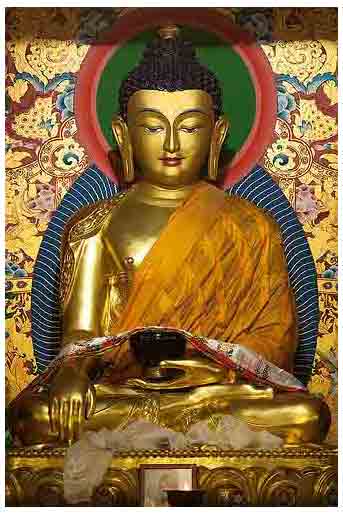 Praises Gatha about the twelve deeds of  Shakyamuni Buddha.

Bow down to Thee, the King of the Shakya, Whose body was glowing like a golden mountain, Who because of compassionate and skilled was incarnated in the Shakya dynasty, and conquer the unbeaten Mara’s army

I glorify Thee, Who after growing the Bodhicitta, has improved the collection of virtues and policies, and being a Protector for all sentient beings through Your wider’s love in this Kalpa

Bow down to Thee, Who, when teaching the Gods, realizing that it was time to guide all sentient beings, and when You came down from the Heavenly, predicts the family of Your incarnation, like a precious elephant go into the Goddess Maya’s womb

Bow down to Thee, the son of Shakya, Whose time of Your birth, ten month later in the blessed place, Lumbini. Brahma and Sakka salute to You, and Your signs have proved that You are enlightened

Bow down to Thee, the Young Lion and the Mighty among the men’s, Who by demonstrating the miracle, has defeated the arrogant people, and made Your self unmatched

Bow down to Thee, Who by adjusting Your actions to the habits of worldly and avoid all mistakes. You have an empress and the follower, and the kingdom which was ruled by a wise

Bow down to Thee, Who understand that the activities of Samsara is by no means, Who has left the family life, Who, after traveling through space, has consecrated Yourselves by Your own in front of the Namdak Stupa

Bow down to Thee, Who are determined to achieve enlightenment through perseverance, Who enforce strict discipline for six years on the banks of  Nairanjana river, Who has perfected the spirit of wise, and has reached the highest level in meditation

Bow down to Thee, Who in order to achieve results, that You are doing since the time without beginning, has sat motionless in the vajra position under the Bodhi tree in Magadha till achieve enlightenment

Bow down to Thee, Who spread quickly the compassionate view to the creature beings, rotate the wheel of Dharma in the special places such as Varanasi, and develop students in the three Yana (vihicle)

Bow down to Thee, Ascetic saint, victor in the battle of heart. Who in order to reduce slander, has subjected the six heretical teachers, men like Devadatta, and demons plains Kormojik

Bow down to Thee, Whose decorations that are unmatched in the three realms, demonstrate the great wonders of Savatthi, so the doctrine (teaching) worked well with the support offerings of the Gods, Humans, and All Beings.

Bow down to Thee, Who can motivate the slow and lazy person in quickly, Who has destroyed Your body that being unchanged and indestructible by death, and passing away into Nirvana, at the holy residence of Kushinagar

Bow down to Thee, Who embody many of the Relics there, and result in Your bodily Relics divided into eight sections, so the creature beings be able to collect virtue in the future. And show that in fact, Thee is not annihilated

In this way, through the merit from a short compliment about the actions of The Blessed One, The Ruler of the great teachings, may the activities of all living beings be equivalent to the Sugata own actions

Hopefully me and all creatures have a shape just like You, king of the Shakya. Followers of the period of life, the Holy Land, as well as signs of perfection, exactly the same  as Thee has.