Variations that do occur in Tantrayana Stupas at Himalaya follow the Tibetan belief that the Dharma mandated the construction of eight types of Stupa, corresponding to the eight great events of Buddha life and their associated pilgrimage spots. The principal differences among the eight types concern the stepped terraces between the lion plinth and the vase. Although almost always numbering four (occasionally three or five), the terraces may be circular, square-cornered, octagonal or even 20-cornered.

Tibetan texts agree as to the basic designs these eight stupa types should follow, but the various texts offer roughly 10 different explanations of what the eight represent. 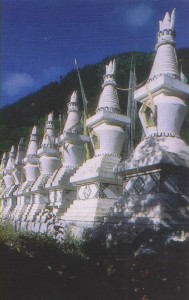 Although the eight Tantrayana stupas at Himalaya occasionally appear side by side in one line or in two rows of four, most commonly they stand alone. In Himalayan lands today, the most commonly seen lone stupa of the eight types – the Mahabodhi, or enlightenment stupa – displays a plain, four-tiered base and a simple dome with no Buddha niches. Devotees typically whitewash the entire.

The most cited version of the eight Tantrayana stupa types at Himalaya are :

1. BIRTH : Round tiers decorated with lotus petals, one large Buddha niche on the dome.

3. TURNING OF THE WHEEL : Square tiers with auspicious doorways (niches) along each level and each side of the base.

4. MIRACLES : Plain square tiers, one Buddha niche on each side of the dome.

5. DESCENT FROM TUSHITA  HEAVEN : Same as Miracles, adding a set of stairs leading from each niche.

6. RECONCILIATION OF THE SANGHA : Square (or occasionally octagonal) tiers decorated with flowers.

8. PARINIRVANA : No tiers, no Buddha niche, dome is often bell-shaped rather than vase-shaped.