Padmasambhava is the second Buddha after Sakyamuni Buddha in Tantrayana Buddhism / Vajrayana Buddhism.  Sakyamuni Buddha once said that eight years after His Death, He will reappear in the Uddiyana country as Padmasambhava, He would be a teacher Who is teaching the Secret Mantra. In the Uddiyana country which located in the west of Bodhgaya, there is an island in the lake Danakosha, there lies a colorful Lotus flower  that emerge because of the blessing of The Buddha.

The Amitabha Buddha transmit from His core a Gold Vajra engraved letters HRIH into that Lotus flower bud, that magically turns into an eight years old Young Child, holding a Vajra and a Lotus flower, and adorned with the signs of large and small greatness, The Child stayed there to teach Dharma to the sacred gods and goddesses.

At that time, Indrabodhi, The King of the country, do not have children, The King give many donations and charity to TRI RATNA ( Buddha, Dharma and Sangha ), and help the poor, hope to get a child, in a final attempt to get a child, The King and His Minister, Krishnadhara, are carrying out a trip around the lake to find a jewel that can grant the request for a child, on the way back to the kingdom, The King and His Minister met with a  Miracle Child, The King thought that was the answer to his prayers that invoke a son, and brought The Miracle Child to the palace and gave the name of the child, PADMASAMBHAVA, which is meaning, Whose born from a Lotus.

Padmasambhava is the first Great Master who teach The Secret Tantric Mantra to the human beings.

The tenth day of every month in Lunar calendar is a holy day for rituals to Padmasambhava. 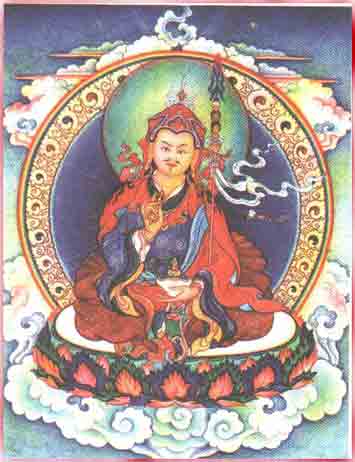 We pray to The Guru Rinpoche please bestow us Thy blessing, The Vidyadhara and Dakini bring us to the great enlightenment purify the whole offense of our sacred promises destroy all disturbances from the outside, inside and secret protect us all the time until we reach enlightenment like the full moon, all filled our life, merit and our achievement bless us so that all our good wishes are met immediately. 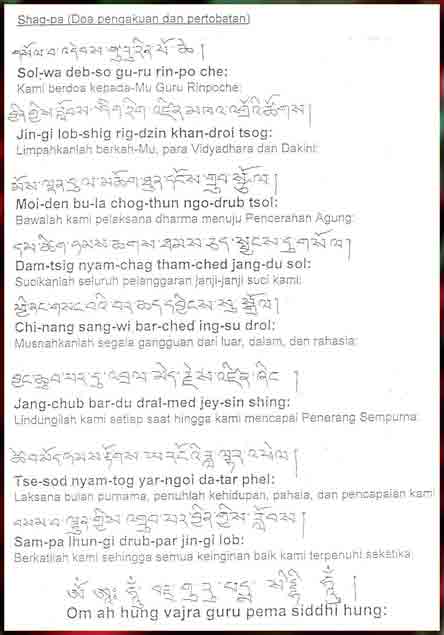