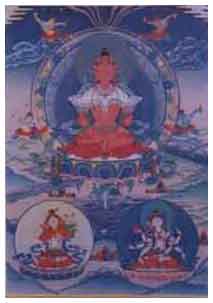 The Buddha of Longevity in this Thangka is Amitayus Buddha in the center, He has a red body with one    head   and two arms, His hair is coiled, on His head is a crown of five Buddhas, He wears celestial clothing and silk robe, shining with jewels, His two hands lie on His leg with His fingers interlocked, on His hand is a longevity nectar vessel, He sits cross-legged on the lotus moon disc throne, on His lower right is the White Tara with one face and two arms, She has seven eyes, three eyes in Her face, two eyes in Her palm, and the other two eyes in Her foot, She sits cross-legged in Vajra position on the lotus moon disc throne, and on Amitayus Buddha’s lower left is the Victorious Hair-Crowned Mother Buddha known as Ushnisha Vijaya Goddess with three faces and eight arms, She sits cross-legged also in Vajra position on the lotus moon disc throne, these three are called Three Buddhas of Longevity.

If the followers often chant Their incantation , they can live longer, achieve true happiness, become wiser and avoid sudden death. 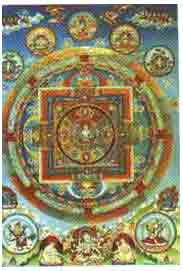 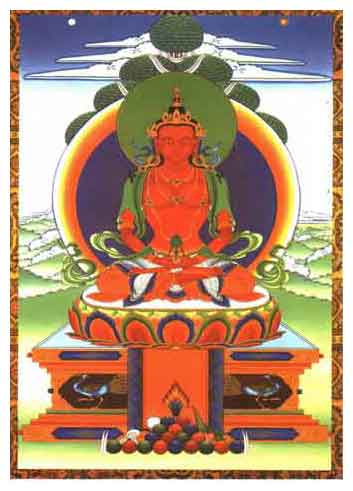 Amitayus Buddha, Bhagawan of the world,     The Glorious conqueror of all deaths which were not in time,     The helper of all beings who suffer without protection,     To You Amitayus Buddha we bow down

A short prayer to Amitayus Buddha :

Chanting the incantation of Amitayus Buddha would be more benefit if the chanter has received Oral Transmissions from a Teacher who holds The Teaching Lineage.