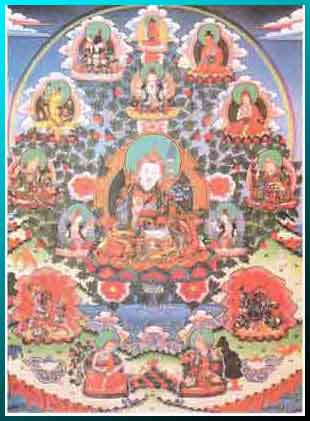 “Lama” is Guru (teacher), Padmasambhava is the Main-Guru in Tibetan Buddhism, He is the first Master who teach Tantrayana between human to human, He brings the teachings of Buddhism from India to Tibet in the eighth century, Padmasambhava taught the Secret Tantric Mantra also, we call Padmasambhava “Guru Rinpoche” 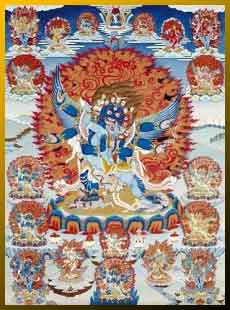 “Yidam” is protector, Vajra Kilaya is one of the protector which is known in Tibetan Buddhism, especially Nyingma tradition.

Vajra Kilaya is The Vajra Youth, the supreme son of all Wrathful Victors united, skilfully slaying devils with His sharp bladed Vajra, the liberator, transcending violence, deity of perfect activity, homage to Dorje Zhonnu, practicing the teachings of Vajra Kilaya is  useful for human beings, also to protect us from harm, the interference from outside, inside and hidden 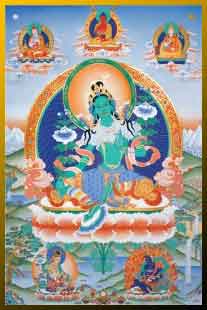 “Dakini” is Holy Goddess, Green Tara is one of the Holy Goddess that taught in Tantrayana Buddhism, many Buddhists in Tibet, Nepal, Bhutan and India make Tara rituals in every morning, Green Tara is known also in Indonesia, when Saylendra Dynasty build Borobudur temple in the middle of  Java island  in the eighth century, they made reliefs and statue of Green Tara too, in Indonesia Green Tara is known as the Green Goddess, many Indonesian Buddhists make Green Goddess’s holy ceremony to bring fertility and prosperity for agriculture in the past time and the present time. 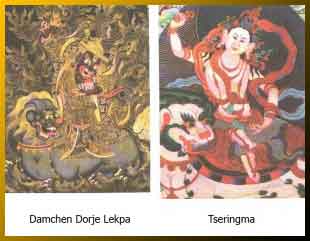 “Dharmapala” is the protector of  Dharma.

Padmasambhava had been plagued by creatures of the Himalayas and the other ruling power of the earth when He spread the teachings of the Buddha (Dharma) in Tibet, but He can defeat these ruling creatures.  After being defeated, these creatures learn Dharma from Padmasambhava up to the level of Bodhisattva, and they swear in front of Padmasambhava.  that in the future, who will run the Dharma properly, will be protected by them  so Padmasambhava called them Dharmapala which means protector of Dharma.

The 29th of every month in Lunar calendar is the holy day of Dharmapala. 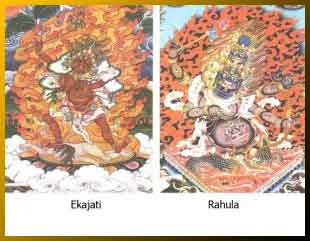