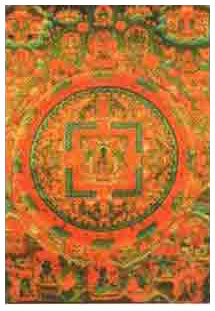 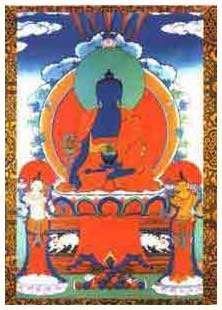 Bhaisajyaguru Buddha which also called Bhaisajya Tathagata or Bhaisajya Buddha is Medicine Buddha, He is the host of eastern world of purified Lapis Lazuli, He is able to cure sickness in birth and death, so He is called Medicine Master.

Bhaisajyaguru Buddha which is known as Medicine Buddha often called MENLA in Tibet, which means the Buddha of treatment.

Bhaisajyaguru Buddha is able to illuminate darkness, this being called Lapis Lazuli brightness, He wears Tricivara, He positions His right hand in such a way to give alms and He holds in His right hand a myrobalan fruit with leaves.  He bolds on His left palm a bowl which contains medicine and dew for curing the diseases of all beings because of evil conduct in previous existences, He is sitting on the Lotus-Moon-Disc throne,

He was two assistants Sun Light Universal Shine Bodhisattva and Moon Light Universal Shine Bodhisattva, this show that He transforms all beings day and night, He leads two medicine guardians to show His great might and protect His followers at all times, if the followers chant His name and His incantation, they will not suffer from disasters , kalpa and diseases  and will lengthen their span of life, they will have great merit and virtue,

the eighth day of every month in Lunar calendar is a holy day for rituals to MENLA / Bhaisajyaguru Buddha / Medicine Buddha, and chanting His incantation is more benefit. 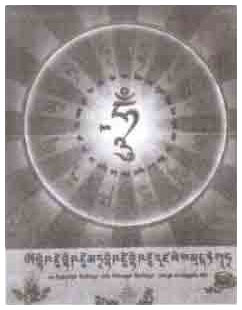 The incantation of Bhaisajyaguru Buddha which is known as Medicine Buddha is :

This incantation can serve to bring blessings of health, also can heal the diseases, can also provide longevity blessing, the incantation of Bhaisajyaguru Buddha would be more useful if the chanter has received Oral Transmissions from a teacher who holds The Teaching Lineage, may all beings can live with the blessing of health, fortune and longevity.